The next time you’re doing a grocery run to the Safeway on Alhambra Boulevard, check out the turquoise-tiled fountain flanked by cypress trees in the parking lot.

The fountain was once part of a half-block-long garden that led to the late Alhambra Theatre, the popular movie palace built in 1923 for $1 million by the Granada Co., founded by banker George Peltier. The theatre was in the image of the famous Alhambra Castle in Granada, Spain, which was known for its Moorish architecture and lush gardens -- complete with reflecting pools. 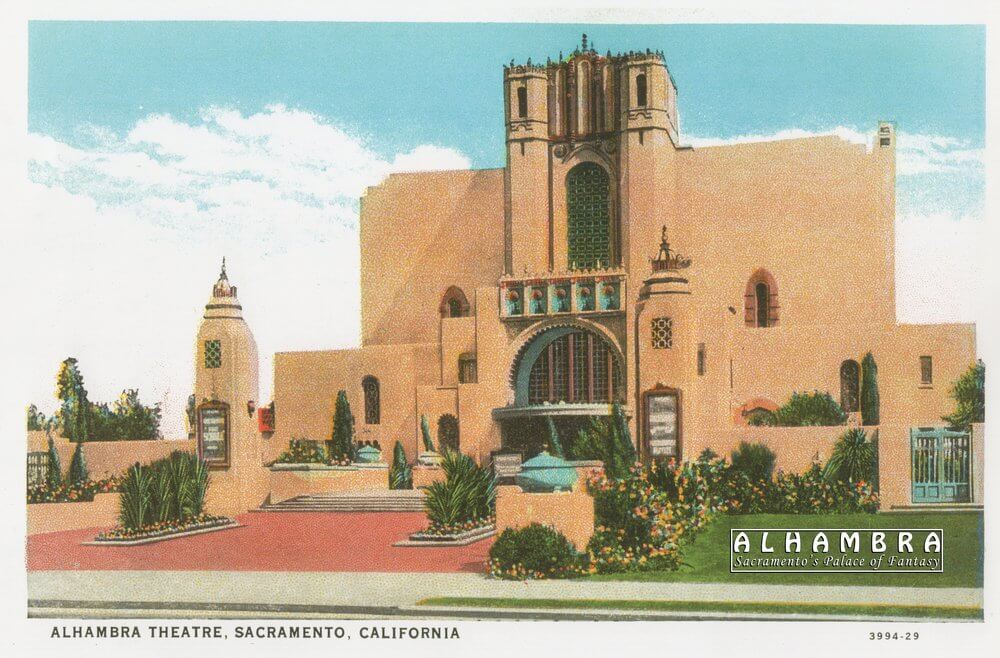 The Alhambra, which also was designed for live entertainment, featured an orchestra pit, theatrical stage, dressing rooms and an organ with pipes that were part of the showplace’s very bones.

“The Alhambra Theatre was one of the great theatres built during the pinnacle popularity of the Hollywood glamour ideal, when movie stars during the silent era were worshiped as gods and goddesses,” said Matias Bombal, who co-produced the documentary, “Alhambra: Sacramento’s Palace of Fantasy,” along with Chad E. Williams.

On Feb. 21, 2018 Sacramentans revisited the Alhambra’s grandeur during two sold-out showings of the documentary in the Tower Theatre.

Back in Sept. 24, 1927, for the Alhambra’s grand opening, Hollywood starlets sang and danced before the showing of “A Night in Spain” on the theatre’s silver screen. On hand for the festivities was California Gov. Clement Calhoun Young, who delivered a speech. And, the Alhambra Symphonic Orchestra performed three Spanish-themed pieces composed for the occasion.

“The movies had a certain intimacy that made you really believe that the people on the screen were your friends, and people developed this unusual relationship, which still works with movie stars today,” Bombal said.

“The idea was founded by Marcus Loew of Loews Theatres. His famous quote, ‘We sell tickets to theatres, not movies,’ was really at the core of what the art of showmanship was all about – the art of not merely showing the movie, but presenting it,” he added.

"Between the late ‘20s and mid ‘30s, an average night or afternoon at the movie was a four-hour experience for which you paid 35 cents. There were no set showtimes -- you wandered in off of the street when you felt like it. In the summertime, it was great because theatres were air conditioned and most homes were not. You could sit there all afternoon.”

Bombal and Williams spent over a year pouring through historical documents and conducting interviews for their documentary.

The subjects came from all walks of life. One woman who was pregnant felt her baby kick for the first time while in the Alhambra. Another patron, then an infant, learned to crawl down the theatre’s long carpeted aisles. A man experienced an accidental dunk in one of the garden reflecting pools shortly before catching a show with his older sister and her boyfriend.

Many recall childhoods filled with Saturday morning walks to the Alhambra for cartoons and free candy.

As it aged, the Alhambra struggled to fill its seats and had to juggle its operating costs.

And during the Great Depression, the Granada Co. decided to sell the showplace to the United Artists chain.

In 1970, United Artists tried to increase the profitability of the Alhambra by building a second movie theatre in its parking lot, but the city council denied the addition because they claimed that there would not be enough parking for movie-goers.

In February of 1972, the Alhambra’s attendance fell to an all-time low, and they issued the following statement: “It is just a question of economics until the theatre was obsolete.” The Alhambra was soon put up for sale.

Currently it costs $8,000 to show one classic movie in Oakland’s grandiose Paramount Theatre. Back in the ‘70s, United Artists had to cover the cost of operations, insurance and many employees which was hard to sustain with such little attendance.

The golden days of movie going began tailing off after World War II.

“After the war, people were not as excited about romantic movies that take you away from it all,” Bombal said. “They lost family members – America sort of grew up. And although the ‘50s seemed idyllic, people had gotten wise. The idea of escapism didn’t seem as plausible when people came back from war mutilated.”

The flight to the suburbs was another reason, he added, “Because of the boom of the automotive industry, people started moving away from downtown to Carmichael and Citrus Heights and as the city spread, they started making smaller theatres.”

In March, Safeway obtained the option to buy the Alhambra, which it planned to raze and build a larger store. However, the public was outraged when the news was announced.

Sensing a public relations catastrophe, the grocery chain offered the community a deal: if $700,000 could be raised by a nonprofit or community group by September, Safeway would rescind its option to buy the theatre.

Though the Save the Alhambra Committee was organized to raise money to meet the challenge, the citizens group was only able to collect $10,000 by September.

Still, Safeway ended up leasing out the Alhambra to the Save the Alhambra Committee for six months so that they could continue fundraising to preserve the theatre. A series of benefit concerts were hosted in the space, featuring Van Morrison and Vince Guaraldi.

The committee put forth a $1.2 million countywide bond measure designed to save the theatre, but it fell short at the ballot box.

At that point, Safeway decided to demolish the theatre.

On Jan. 3, 1973, five men and two women -- not affiliated with the Save the Alhambra Committee -- broke into the theatre to protest the demolition, occupying the Alhambra for five days.

As the drama unfolded, Safeway executives considered donating the theatre to the city of Sacramento. However, when Safeway board members visited the theatre, the protesters dumped garbage on them from the balcony. In the wake of that egregious faux-pas, the fate of the grand movie palace was sealed. The Alhambra would be demolished into dust.

“I think the driving force when we made this movie was that so many people said, ‘Safeway destroyed the Alhambra, I’ll never shop there again’,” Bombal said. 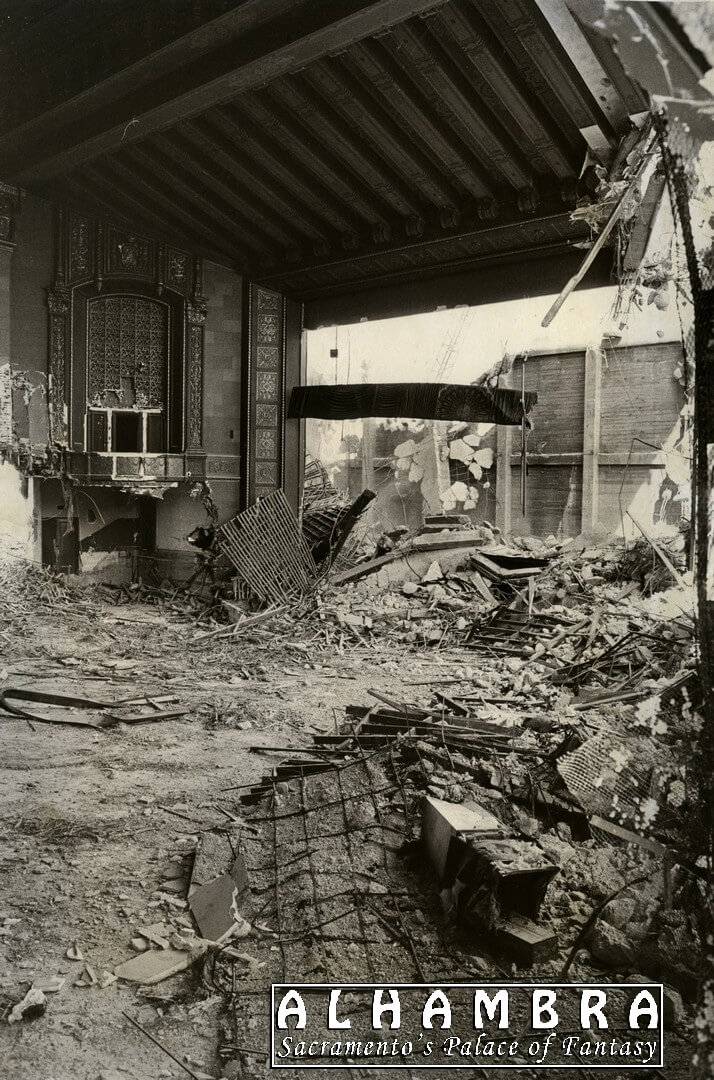 “We wanted to set the story straight. … If there is one thing that I wish that people knew about the Alhambra, it is that Safeway was not at fault with the Alhambra, it was the public which was unaware of what they were losing.”

Currently, Bombal and Williams are raising money to expand their documentary to 90 minutes, with newly found footage, to air on Netflix or Amazon. They also are seeking $100,000 to shorten the documentary so it can be featured on local PBS station KVIE and other PBS stations throughout the country.