This Is What One Man Can Do

“I’m breaking hearts every day.” That’s what James Kinloch tells me during the first 30 seconds of our first phone conversation.

It’s a Wednesday morning. I’m in my car, outside a Walgreens, talking with James on the phone.

“Listen,” he goes on. “Every time someone writes an article about the Lofts, I have to break more hearts. I’m breaking hearts every day. We don’t have any space. So when someone writes something about how cool WAL (The Warehouse Artist Lofts on R Street in mid-town Sacramento) is, I get 50 phone calls from 50 new people I have to disappoint.”

“That sounds rough,” I tell him.

Then an idea dawns. “Maybe this is our story,” I propose. “Maybe this article is a story about how badly the Sacramento area needs more affordable housing.”

“Well. Now you’re talking.” James says. His voice softens, my heart opens. James and I feel connected now. We are a united front. We can both feel that this is one of those magic moments where doing the thing you love (writing, for me, running WAL for James) suddenly reveals itself as a possible way to contribute to the greater good. 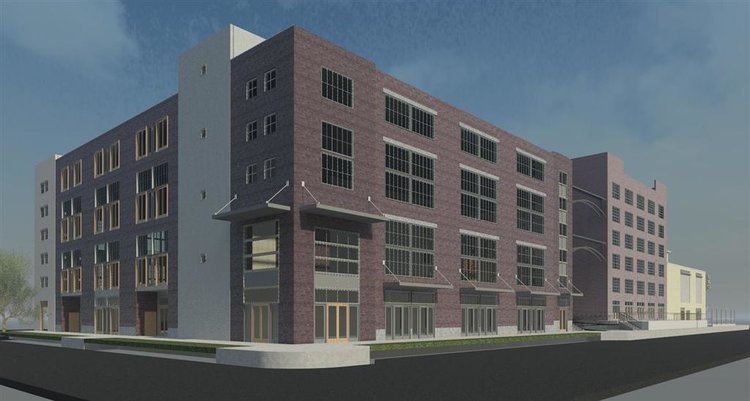 “I love this place,” James says “I just wish I didn’t have to turn so many good people away.”

During our conversation, James reveals some very useful and surprising information. He explains to me how Section 42 Housing (approved by the state affordable housing commission) works (it’s complicated). He also explains what it actually takes for affordable housing to get built (a LOT). And, he explains how WAL on R Street, and the soon to be built new artist community in Truckee, would not exist without the incredible efforts of one amazing young man, Ali Youssefi, who didn’t have to build WAL, but did. Because he cared.

James fills me in on how projects like this happen.

In order for affordable housing to get built, developers have to choose, they have to elect, of their own free will, to invest their money (you know, that green stuff that most of us hold on to so tightly), into a project that will. not. make them. any. money. in return.

Buildings of this sort, once approved by the state, (through a lengthy, often years-long paperwork-laden process) do yield their investors a tax credit once built, which doesn’t hurt, but again, it also doesn’t make them any richer, that’s for sure.

James continues, insisting I know more about Ali Youssefi, the man responsible for doing this particular form of good, just because he wanted to.

“Ali grew up here in Sacramento, with well-educated, very loving parents. He went away to a great school, came back to Sacramento, and could have done anything at all with his education and influence. But a lot of his friends were artists, and through them, he fell deeply in love with the arts. He saw how much his gifted, artistic friends were struggling and how hard their lives were. So, he decided to build WAL. To help his friends, and to support the arts in Sacramento.”

“He didn’t have to do that, you know?” James asks.

I do know. I am amazed. And eager to meet this Ali Youssefi. “What a gem of a person,” I think to myself. “I’ll have to ask James for his email later so I can speak with him directly.”

“He always went above and beyond, too.” James tells me. “If you see the apartments at WAL, they’re gorgeous: brushed stainless steel appliances, quality materials, the finer things. He used to say ‘Why should people not have nice things just because they’re not well-off?’”

Then came another surprising turn in my conversation with James.

“I’m sorry,” he begins, his voice cracking. “I get a little choked up talking about this… Because… We lost Ali this year.”

“Lost him? What do you mean?” I don’t understand.

“He passed.” James tells me.

“35. He had stomach cancer. He threw everything he had at it to try to beat it, but…”

I can’t internalize what James has just said.

The good guy? The 35 year-old good guy? Who spent his money helping other people? That guy… Died?

“His passing is a huge loss for our community, and I can tell you, as a somewhat older person now,” James insists on trudging forward. His love for Ali is driving him now. “-that communities like WAL are few and far between these days. I’ve watched our culture change over the years. I’ve seen it happen. WAL is a truly tight community that has been fed and flourished. There aren’t a lot of those now, you know what I mean?”

“I mean, it sounds cheesy,” James laughs, “but one night recently, I ran out of soy sauce, posted that on the WAL Community Facebook page, and within 10 minutes someone was at my door with soy sauce. That’s what happens when you get a bunch of like-minded people together.”

“The problem is,” James continues, “I have 11 apartments at one of the qualifying income levels, and a 70-80 person wait list built up for those 11 spots.”

“The heartbreak comes when it’s one of two things for me:” James says “1. Domestic abuse sufferers show up and they’re trying to survive or get out of danger and I have to turn them away, and there’s nothing I can do. And, 2. the artist that is so beyond talented, and so clearly in need of the kind of support we can offer them here at WAL, a community of creative people, who I have to turn away- like recently, I had to turn away a young, very feminine man who is clearly coming from a home he has to GET OUT of, and this would be the perfect place for him to live, to not only find that support, but to also find that commonality with people who are like minded. And I couldn’t take him. That’s the heart break for me and it happens all the time. Because there is such a major need for this- for truly affordable housing- in Sacramento. Everywhere, really.”

“And it’s becoming harder and harder.” James explains. “The bottleneck is becoming bigger and bigger. And, recently, the current administration has made it less appealing for people to invest in tax credit housing. So…”

“Ali died on March 10th of this year. This guy was a huge friend of the mayor. A co-owner of the Kings. And a philanthropist, you know? He was amazingly generous. He didn’t have to do this. He could have done anything. But he chose to do this…”

“The good news, I guess, is we are moving forward with his projects: 17th and S just got financially funded through the state, we have 3 more projects with his signature on them, and we are determined to make those happen.”

James takes a breath. Gathers himself. And says. “This is what one man can do.”